Everything is going to be fine, always! Sometimes we see the way, sometimes we just need to “Wait and hope”! Because it is a wonderful, really amazing world around!

Today I had a really interesting day in the center with the kids. This week the task was to teach them some fruits and to recall them the colors in English that they already knew. So today we decided to organize them a little competition, in which they had to draw their favorite fruit and after that to describe it in English. From the very beginning I separated the kids in 4 groups, dividing them by age, as well as, by their skills in English. So everyday I was preparing lessons for each group, which was quite a task, but an important one, because they were able to improve their language skills in a better way. Before the game the leader of the organization, who was helping me (because we didn’t have a teacher), and I prepared also some surprises for prizes! 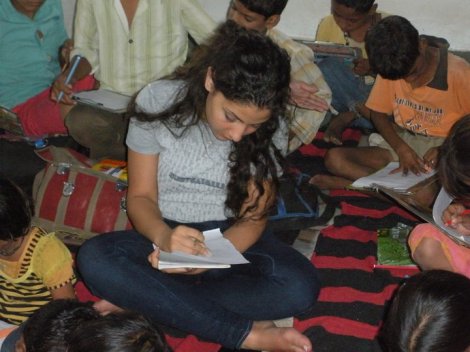 The interactive study was so great you could not imagine. I sat among the children and started painting as well. Fantastic! I felt so charged because of the kids. They are really special and carry on them some incredible spirit that couldn’t be explained within a few words. And every time we greet each other they will rest their hands in prayer position and with a small bow are going to tell me: “Namaste, teacher Paris” (“Namaste” – goodbye). This is the traditional greeting here or “Namashkar” in its more formal version.

Apart from the activities in the center, during that week I had also many difficulties. It turned out that in India, providing the things I needed, like telephone number or Internet on my I-pad, was not so easily done. Finally, when I succeeded to receive at least a cellphone number from the carrier “Vodaphone”, I had to pay almost 2 euro a minute for calling to my country – Bulgaria. The reason for this high price, as they explained to me, is that Bulgaria is put in a special group as a non-European country. It is very funny that a big company like them had not made their research to find out that Bulgaria is actually European country.

Apart from these little straits, my observation until now is that people are really cheerful and kind, as well as very happy. Really everywhere we go I smell spices in the air and I see smiles on peoples’ faces. They really appreciate what they have even if it is not that much. 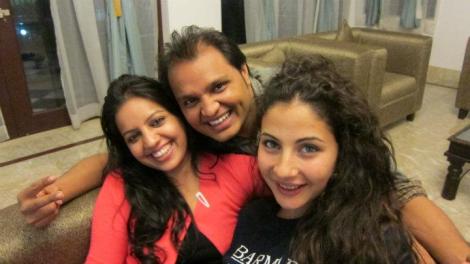 I had the possibility to have an interesting conversation, during that same week, with the father of the leader of the organization. He seemed to be a very kind and relaxed man, dressed all in wide, white clothes. He explained to me that in India people strictly follow the caste system – the system of dividing society into such classes. According to Indians there are 4 major castes – Sudra, Vaishya, Kshatryia and Bhramin, which hierarchy is well explained by this pyramid.

The family that I was staying with in the guest house, was from the highest possible caste, which is Bhramin. They are considered as more spiritual people. It is interesting that nobody from this society has ever eaten meat. They believe that the murder of animals, in order to fulfill the savage needs, is just not right (The Judaist people are even more radical – they believe that when walking around ones must be aware not to kill an ant.) During the summer the Brahams believe that we need to consume big amounts of fresh juicy fruits and vegetables – watermelon, cucumber, pumpkin, coconut. In India the national fruit is mango, but they say that in a big quantity it increases dangerously the body temperature. Also Indians have very interesting candies for body digesting, which are connected with Ayurveda – a study that use only natural healing with a pills made of herbs. According to Ayurveda ones shouldn’t consume onion and garlic, because they are extremely heavy and do not affect well our bodies.

But do you know what is really strange? How different is our “European” thinking compared to the Indian one. According to me, because of their traditions, rituals, and beliefs, because of their more primitive way of living Indians look after their nature a lot more than we do. Yes, the streets are very dirty and it is very noisy of all the cars, but for an example, in the supermarkets they use only bags made of fabrics or paper. No exceptions. Why are we, the European citizens, not doing the same? Why are we still stick to the plastic bags, even though we know that they are harmful to the environment? In almost every Indian house there are energy-saving devices (which I very rarely see in my country, for example) and when they are not using something they switch it off.

It was very hot during my stay, but they were using very big fans that really cooled off the entire room and at the same time were not as harmful as air conditioners. They do that, mostly because most of them are living even beyond the poverty line. Something else that I saw in the wealthy families as well as in the normal ones that made me impression is that they do not cook more than they could eat. Indians are really capable to help each other and they are ready in every minute to do everything they can to make the other person to laugh. You can feel the empathy there – you look somebody in the eyes, a random one, and you can see their soul, their spirit. This doesn’t happen to me so often in Europe. Can you, my readers, give me some explanation why are they so bad in economical terms? To be successful and rich these days do you necessarily have to be greedy and selfish? Explain to me this? Is it because am I too young and naive that I believe because Indians are kind to each other, because they smile, and dance and help our planet, they disserve a better life? Am I just an idealist? There are so many questions that could be asked, and I am not really sure that I want to accept the answers, if there are an existing ones. Do you know why? Because no matter what is happening in my life, I will never stop searching for the peoples’ eyes. Real eyes. Eyes in which every time I look, I will find a soul behind and a spirit, a true spirit.

6 responses to “India 4. Eyes in which every time I look, I will find a soul behind and a spirit, a true spirit.”